During Whole30® when menu planning I really wanted sandwiches at one point because they are a quick and easy meal and don’t take a lot of prep and aren’t leftovers. As I was trying to decide how to go about doing this, for some reason peanut {or almond} butter and banana came to mind when thinking about what sounded good on sweet potato toast. Nut butter and banana was a snack we, my husband especially, would make frequently prior to W30, but he would add honey (which is obviously out during W30), raisins, and chia seeds to it and eat as an un-burrito (we originally started eating this combination as wrapped in a tortilla shell before we cut way back on bread in our family).

I don’t know what made me think this would be a good combination, but I guess because the sweet potatoes add a little bit of that sweetness to meal that adding honey to the combination when we eat this as a non-W30 snack. And let me tell you, it was D-E-L-I-C-I-O-U-S! Oooh, it’s so yummy even just thinking about it right now makes me want one.

So it’s pretty simple, really, but just in case you haven’t figured it out, I’ll share with you what we did. We enjoyed these on a Sunday because I wanted something that would be easy to throw together after church so we could get on with the day’s activities. I sliced the sweet potato toast the day before so they would be practically ready to go in the oven. Then after they were finished, I simply spread almond butter on each piece, put bananas on each piece, then put halves together. If you could figure out an easy way to get the butter on the bananas so there’s another layer of it between the bananas so they stick together, that’s a good idea too. Or you could put almond butter on both sides of another toast slice and stick it between the banana layer so they stick to it! Really you can’t go wrong any way you make these. But if the bananas don’t stick together and you use 2 layers of them as I did, be prepared for a messy meal. 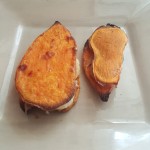